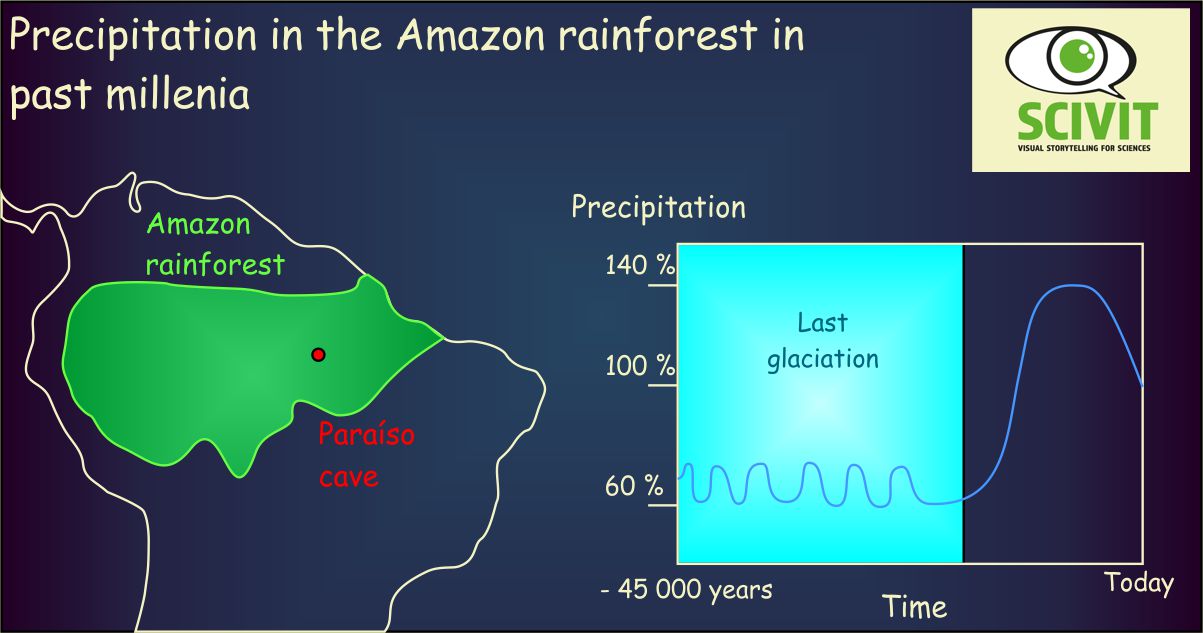 Precipitation in the Amazon rainforest in past millenia

How are ancient precipitation rates measured?

The Amazon rainforest is a critical hotspot for biodiversity and as a carbon sink. How will the rainforest react to shifts in temperature and precipitation in the wake of climate change? To answer such questions Wang and colleagues studied oxygen isotopes in mineral deposits from a cave in the center of the Eastern part of the Amazon rainforest. Data spanning the past 45 000 years with a decadal resolution were obtained from seven independent specimen. The material was dated using the uranium/thorium dating technique.

There are three stable oxygen isotopes (16O, 17O, 18O) with 16O as the abundant form. Water with 17O or 18O is heavier than water with 16O. Rainfall therefore is enriched in 18O and leads to an increase in 18O-values on the ground. High 18O-values during the last ice ages therefore referred to low precipitation during these times and low 18O-values about 6000 years ago referred to higher precipitation. Inspite of these relatively strong shifts in precipitation, rainforest persisted over the complete period analyzed. This was indicated by the analysis of carbon isotopes, which did not show signs of savanna-like ecosystems, rich in grasses.

Outlook for the Amazonas

According to the results presented by Wang and colleagues, rainforest in the Amazonas basin is relatively stable persisting even at precipitation rates reduced by 40% compared to today. The positive relation between precipitation and global temperatures from the historic records predicts rather rising than falling precipitation in addition. The rise in deforestation, however, may change this relation. Drought, furthermore, is only one possible stress factor. The amazon rainforest will be exposed to many other disruptive effects of human activities in the future.